In my previous post I wrote about Bitcoin, and presented an argument for the fact that Hurst cycles are active in the price fluctuations of this new currency. I concluded that post by stating that I believed a peak of 42-month magnitude was due to occur soon. I published the post on 16 December 2017, and on 17 December – the very next day (Bitcoin trades on a Saturday and Sunday) the coin reached a high price of $19,870 and promptly turned downwards. Just over a month later the coin dropped below $10,000, having lost nearly 50% of its value.

When I wrote the post in December, I was inspired to do so by the constant media coverage of Bitcoin – to the extent that pretty much the first thing anybody asked on hearing that I had an interest in financial markets was “What do you think of Bitcoin?” I am a dyed in the wool contrarian, and my first reaction when an investment instrument is making headlines, and everybody is wanting to “get on board for the ride”, is to expect a peak to form and the price to fall. The Hurst cycles analysis indicated that indeed a peak was due, supporting the contrarian view. As an aside here: I was asked in December to provide advice to someone who was very keen to buy Bitcoin. I realized the extent of the bullish fever when my advice not to buy because I believed the value was about to fall was greeted with disappointment, and a response of “Are you sure? Isn’t it possible that you got it wrong?” Bitcoin was clearly inspiring some of the feverish “madness” that inspired bubbles such as the Tulip craze in the 1600’s.

A month later I find myself inspired again to write a post about Bitcoin … again because of the media coverage and hype around this investment. However now media coverage is mostly on the other side, as demonstrated by this headline: 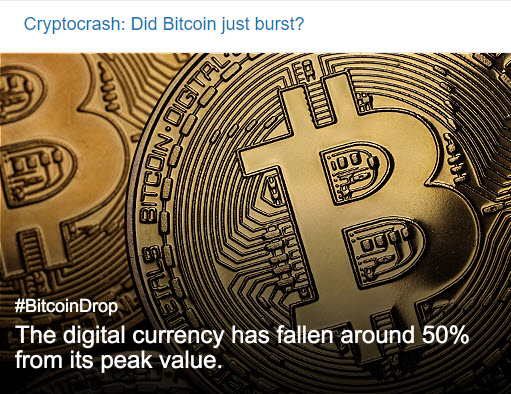 There are many people crying “I told you so” because of the dramatic drop in value of Bitcoin, and claiming that Bitcoin’s future as a currency is over. However I am not one of them… As a contrarian, when the media starts ringing the death bells, I take an interest again. And of course my interest leads me to turn to the cycles to ask what is happening.

Is Bitcoin going to turn into a 21st-century example of the Tulip craze? I cannot provide a definitive answer to that question, however I believe we are at a critical juncture. If Bitcoin is able to settle into the natural rhythm of a currency, and start exhibiting clean “normal” Hurst cycles, then I believe the answer to that question is no, and Bitcoin will earn itself a place as a regular (if particularly volatile) currency. If Bitcoin fails to settle into a regular Hurst cycles pattern, then indeed we might look back on it as an example of how the madness of crowds continues into the 21st century.

I am inclined to give Bitcoin the benefit of the doubt, because it has recently been exhibiting good clean cycle structure as shown in this chart below. As discussed in my previous post, I believe that it is exhibiting the characteristics of an instrument that has synchronized peaks, which makes the peaks much more easy to identify than the troughs. In the chart below note how the circles and whiskers to the right hand side of the chart (in the area of the future, where there is no price data), are much clearer at the top of the chart (where the peaks are projected), then they are at the foot of the chart (where the troughs are projected). 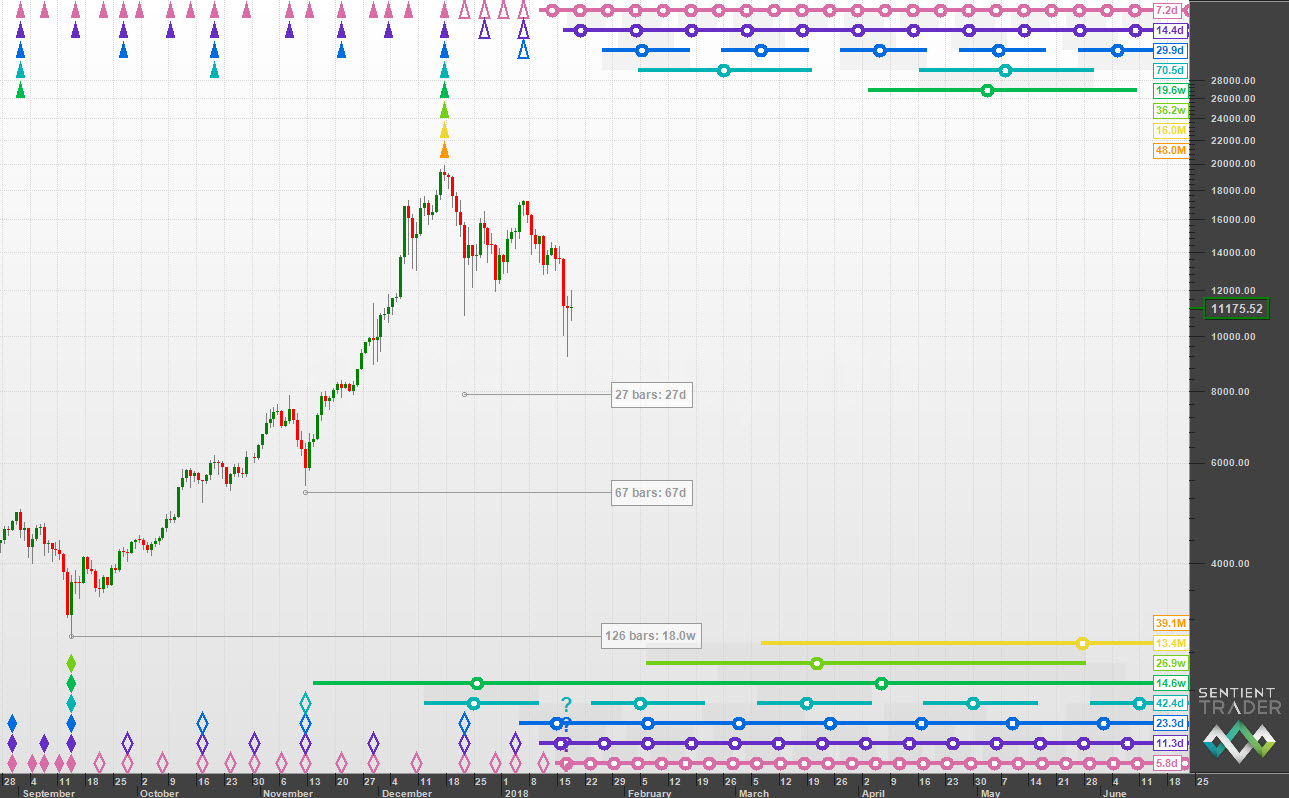 Nevertheless there is a discernible rhythm in the troughs, even if the variation in wavelength is a bit wider than it is for the peaks. The reason why I say that Bitcoin is now at a critical juncture, is that we are expecting a 20-week trough to form. If a good clear trough does form at this point then we would expect the value of the coin to bounce up from that 20-week low,  and its response to the Hurst cycle influence would encourage me to believe that Bitcoin is finding its feet as a new currency, moved by the same cycles that move all other currencies. (As a matter of interest the question marks at the foot of the chart beneath Wednesday’s trading bar indicate that it is possible that 20 week trough formed on Wednesday).

Another very encouraging feature of the recent price action is that it has fulfilled a perfect “zigzag” move for the 20-week cycle from the peak on 17th December to the potential trough on Wednesday 17 January. This chart shows how Sentient Trader’s zigzag feature plots that zigzag downward move, and because of the perfection of that move, is already assuming that the move is complete and that the next move to expect is an upwards bounce out of the 20 week cycle trough. 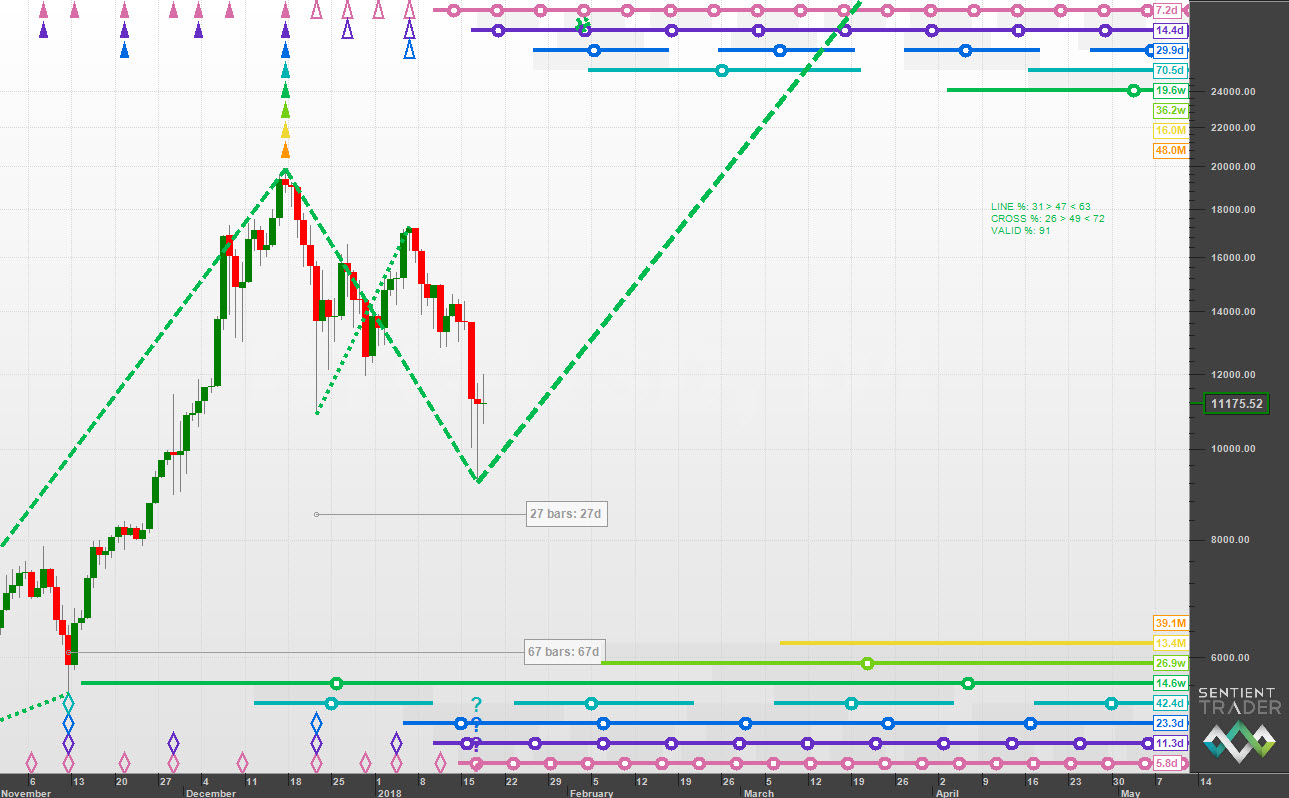 Optimists amongst you will notice that the projection for the 20-week zigzag move up takes us off the chart to new high prices. I should caution you to take that projection with a pinch of salt, because it is based on recent moves out of the 20-week cycle trough, which have of course all been extraordinarily bullish. The zigzag tool considers each cycle in isolation, and does not consider the effect of that large and ominous peak in the middle of December. If that is indeed a peak of the 42-month cycle, then the bounce out of the 20-week cycle at this stage will not be nearly as impressive. To temper our enthusiasm for this bounce it is worth pointing out that this bounce is going to provide the correction for the 40-week cycle zigzag downwards from the peak in December to a trough expected in late March or early April, as shown in this chart: 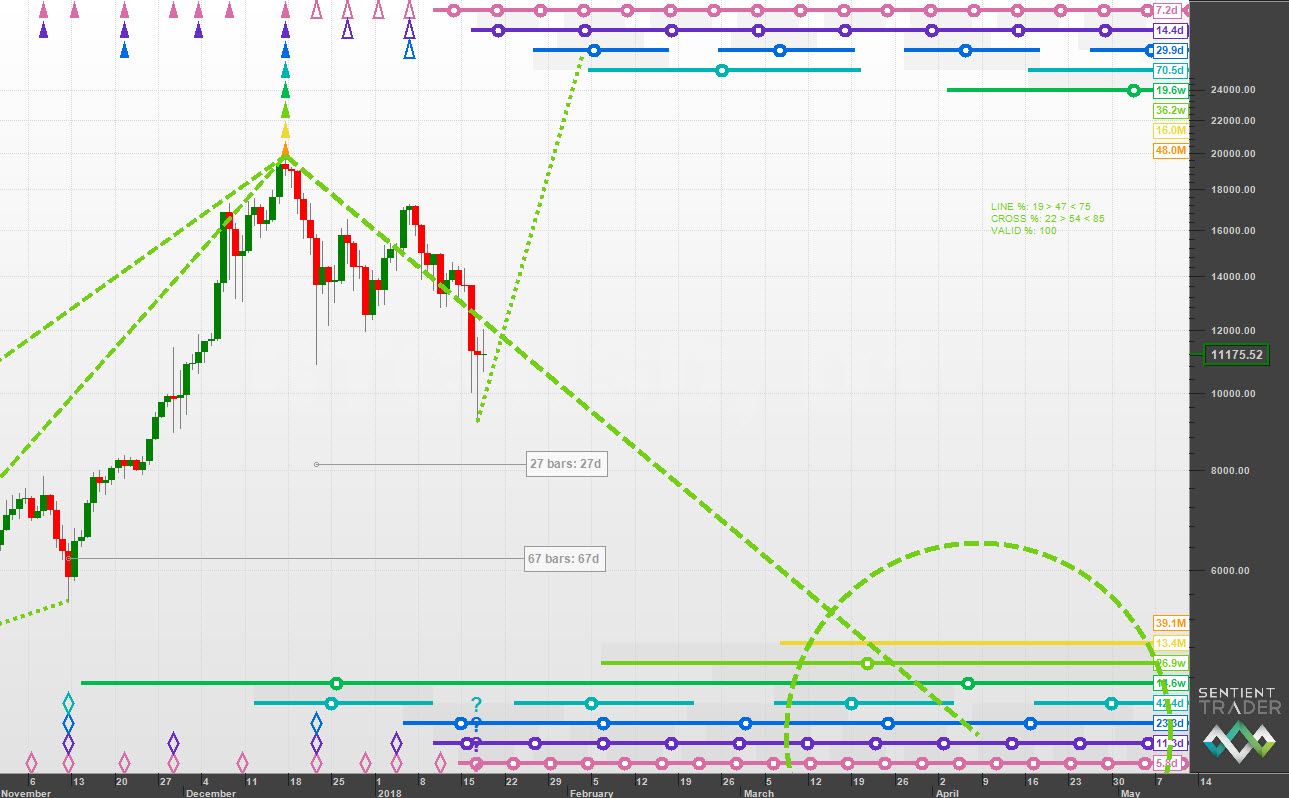 Considering the combination of all these different cycles is what makes understanding a Hurst cycles analysis such a fascinating and complex process. Another tool which gives us a way of visualizing the implications of an analysis is the Composite Model Line, a relatively new feature in Sentient Trader which simply takes the cycle information derived from the analysis on the chart and “puts it back together” if you like, thereby composing a purely cyclic price action, in other words a hypothetical price action created by the combination of the cycles that have been identified in the market. This line is then projected forwards, on the basis that the cycles will keep beating with the same wavelength and amplitude (in fact the line assumes that the wavelength and amplitude of each cycle will return to average values if they are currently extended). This line should not be used as an absolute forecasting tool because we know that cycles are dynamic, and are constantly varying in their wavelength and amplitude, but it is nevertheless a useful tool to give us an idea of what to expect on the basis of the analysis on the chart. Here is the Composite Model Line for this analysis: 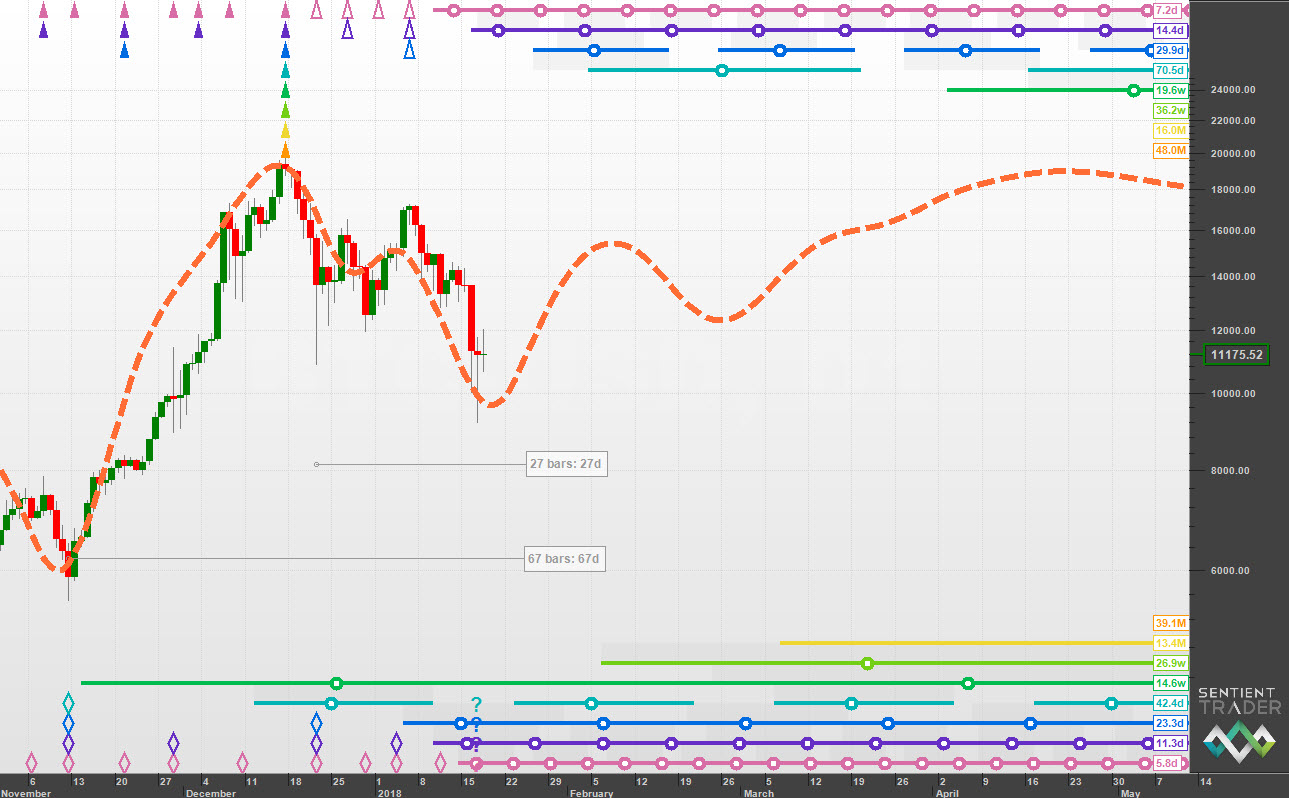 But looking ahead a few months and debating which cycle will prove more dominant at that point is an uncertain business at best. The important point that I wish to make here is that a 20-week cycle trough is expected to form. If the value of Bitcoin increases at this point and shows that it is responding to that 20-week cycle, then our confidence in the fact that Bitcoin is settling into the natural rhythm of the cycles will increase. What happens after that remains shrouded in some uncertainty, but as time passes and our confidence in the cycles moving Bitcoin either increases or decreases, we will be in a better position to resolve that uncertainty.