In February this year I was studying a long swing trade for natural gas (/NG Henry Hub). Here is an email I shared with David Hickson and some others privately:

I would like your opinion on a trade I am studying. I know you will think it crazy to be looking at the natural gas market, but a long setup is brewing based on cycles. The first premise is that natural gas works on the same cycles as oil, but has different phasing in the long term cycles. The second thing is that when you study natgas, it works really well on a peak cycle view. So here’s the setup.

On a very long view, the last 11 year peak for natgas was 2006. So potentially a smart spike in natgas would arrive approximately 11 years later or towards 2017. There has to be many months leeway either side for this coming peak. Working off the previous 33 month and 66 month peaks (very consistent), we are due a natgas high late 2016 or into 2017. Natgas would be much more bullish than oil. The 11 year peak for crude (same cycles as natgas) is only due in 2019.

The short term view is as follows. This week is 8 weeks now off the Dec. low. If bullish, a low should ideally be made here shortly.  Then price should rally up into a 16 week cycle high due April/May (see daily chart). We would need a cross of the 16 week FLD (green line) to signal a buy and that this trade might work. Of course there is risk of a retest of the lows. But I think this is something to watch. I’ve attached a natgas bat pattern which allows more downside here near term.

I have not blog posted but plan to soon if this scenario looks encouraging. If oil bottoms here in the first quarter, natgas downside should be limited. I think I have heard that before.

There has to be a fundamental shift to fuel this move. This year’s target may only be $3.00 – 4.00, but something has to get it moving. Fundamentals are pretty bad.

So you can see that I was eyeing up a trade without much conviction. I never got around to posting the analysis back then. I did take some exposure to this trade with Jan 2017 UNG calls and some natgas stocks. I am approaching the point of closing the remaining positions as this market achieves its objectives. Here is an updated view on the model and timing for the projected peak.

The coming peak is expected to be the synchronized peak of at least the 66, 33, 17 month cycles and so on down that is shown in the chart above.  The next larger cycle up which is the 11 year (2:1 harmonic) could also be making a peak. This is a fairly important peak for natgas and the expectation would be for it to settle back down in a meaningful way. A complete retest of the lows in the coming year would have to be expected. In fact a good short trade is setting up here off this major peak.

A closer look at the daily cycles here suggests an initial peak as early as next week but this could be followed by one more final move up into November or December. The timing here cannot be that precise when such large cycles are involved. However, these cycles have been very consistent and a peak for natgas would have to be expected before winter starts in North America. The 33 month FLD suggests a minimum target of 3.60 and natgas is almost there now on a cash basis. I expect this target to be met and likely be overshot given the very large cycles involved. Momentum is picking up in the sector and speculation should lead to a final high in the coming weeks. I should also mention that the 66 month FLD (orange) is shown in the chart above. This FLD is drawn with a 33 month offset from price, and its now mirroring the peak of February 2014.

Seasonal trends are also in play and have been working very well for natgas. I was reminded this weekend at the CSTA Technician’s Day that natgas is in midst of its best seasonal period which carries late into the year. Chart courtesy EquityClock.com. 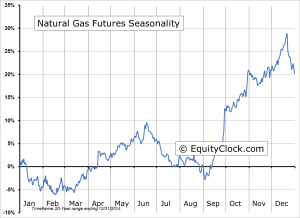 One of the most important points to understand here is that with the Hurst cycles method and the right analysis, you are given a time frame to get active and look for trade setups, whether long or short. What I like most is this approach gives you a view on what is around the corner. GLGT.