The bar counts indicate that we have another 11 to 23 days to wait until the trough forms (assuming that the cycles clock in at their average wavelength).

One of the pieces of information that we can glean from an FLD is that a trough of the cycle upon which the FLD is based is likely to form at about the time of a peak in the FLD. This chart shows how that indicates a similar time for the trough: 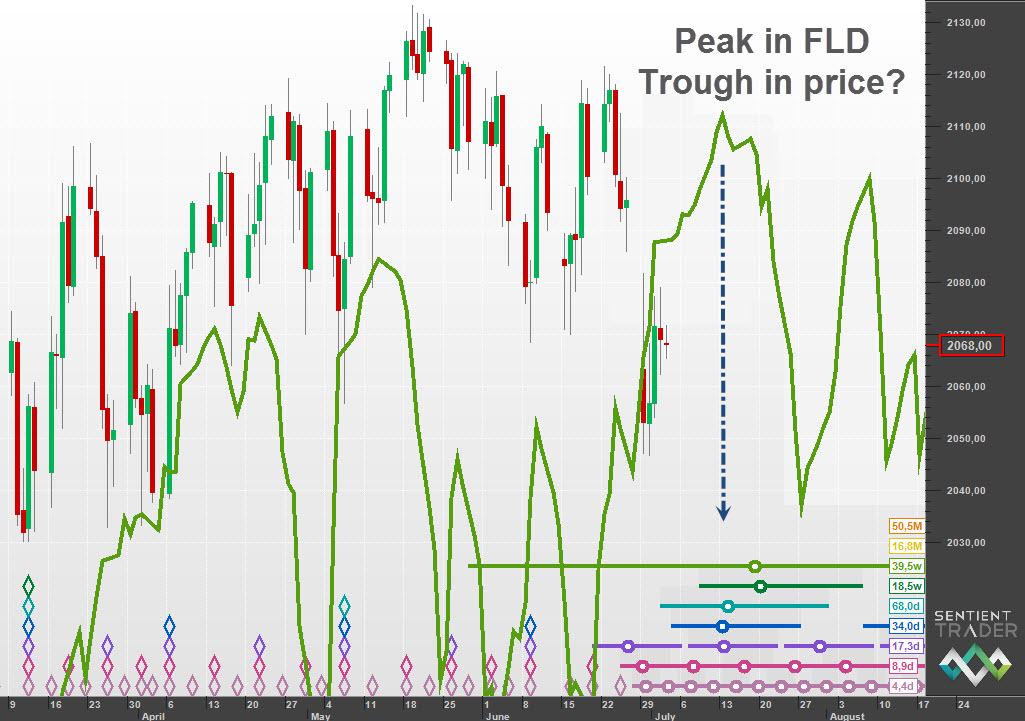 Price has been “tracking along” the FLD this week, but I expect it to peel away to the downside, and then to remain below the 40-week FLD all the way down to the next 18-month cycle trough which I expect in early 2016.

William Randall pointed out in his post earlier this week that the 18-month cycle trough might not have formed in October 2014 (and there is some discussion around this in the comments to that post, so make sure you read all of the comments as well). If that is the case then of course the trough I am discussing here would not be a 40-week cycle trough. Fortunately it doesn’t matter very much because of what I like to call the “robustness” of using cyclic analysis. Because the cycles form an harmonic nominal model, we don’t have to correctly identify the magnitude of the trough in October 2014 to know that approximately 40 weeks later another trough will form.

If the October 2014 trough is of lesser magnitude than 18-month then the trough I am expecting to form in July will probably be of higher magnitude. The important thing in my opinion is that we expect a trough to form, and therefore price to move down into the trough, and then to bounce out of it.

We can always look back after the trough has formed and resolve the issue of the trough magnitude … although sometimes one has to wait a long time before being absolutely certain of the magnitude of a trough, as William mentions in the comments to the above-mentioned post.

One thought on “A July Trough?”