I have been watching the Euro (see also this post) for signs that the big magnitude trough that I am expecting to form has occurred. In September 2014 I wrote about this trough, and mentioned the difficulty with the sub-division of the 54-month cycle. This makes it very difficult to be confident with a projection for the time that the 54-month (and perhaps 9-year) cycle trough is expected.

Here are some options for you to consider: 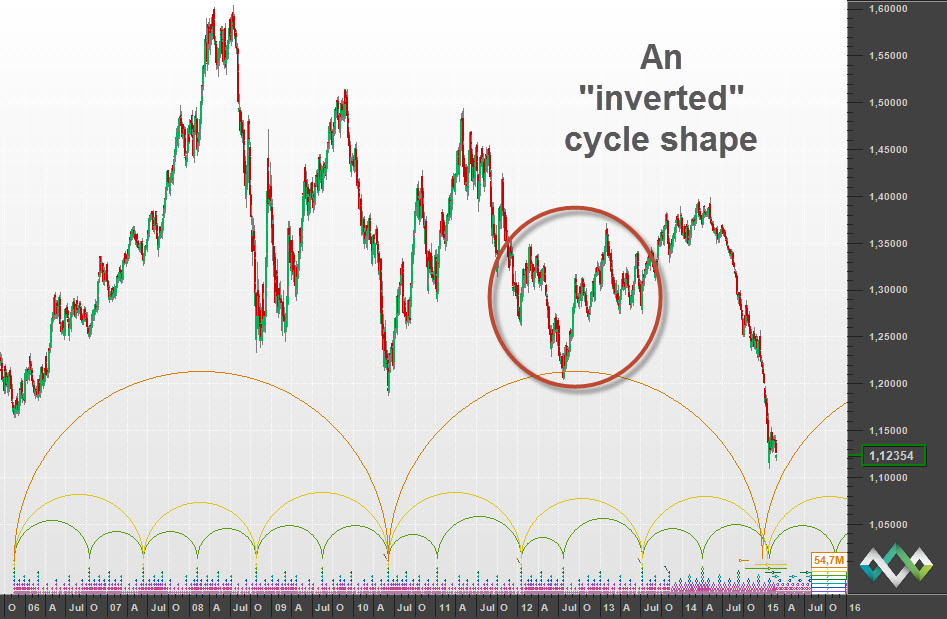 This is my preferred analysis, but the problem with it in my opinion is that circled 18-month cycle, which I describe as an “inverted” cycle shape because the central 40-week cycle trough is a deeper trough than the 18-month cycle troughs on each side of it.

This analysis avoids that problem: 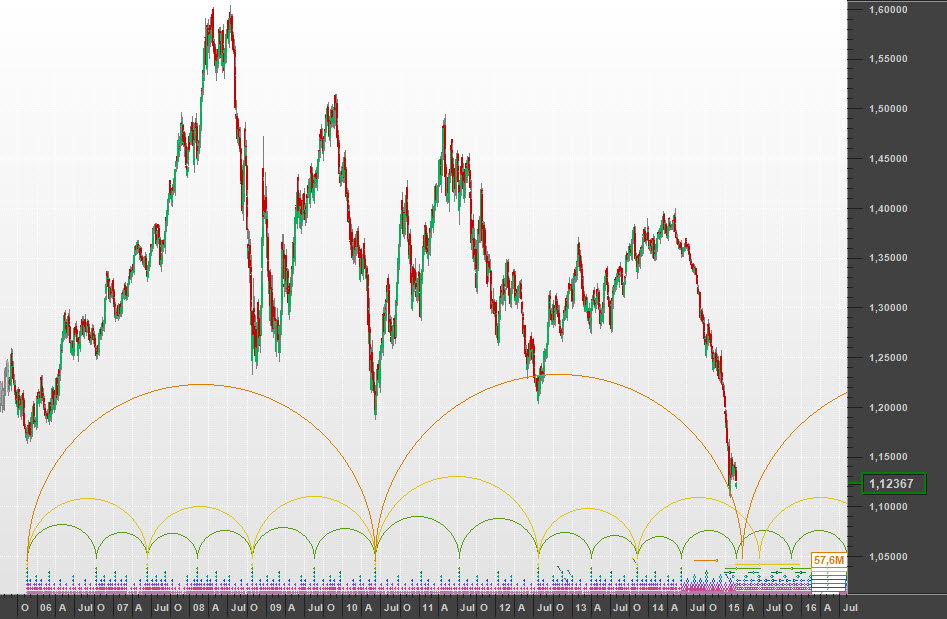 But it avoids the problem by creating another one: a very long 18-month cycle of over 24 months. There is another possibility which I touched on in September last year, which is that the 54-month cycle is sub-dividing into only two cycles, instead of three. Here is that analysis: 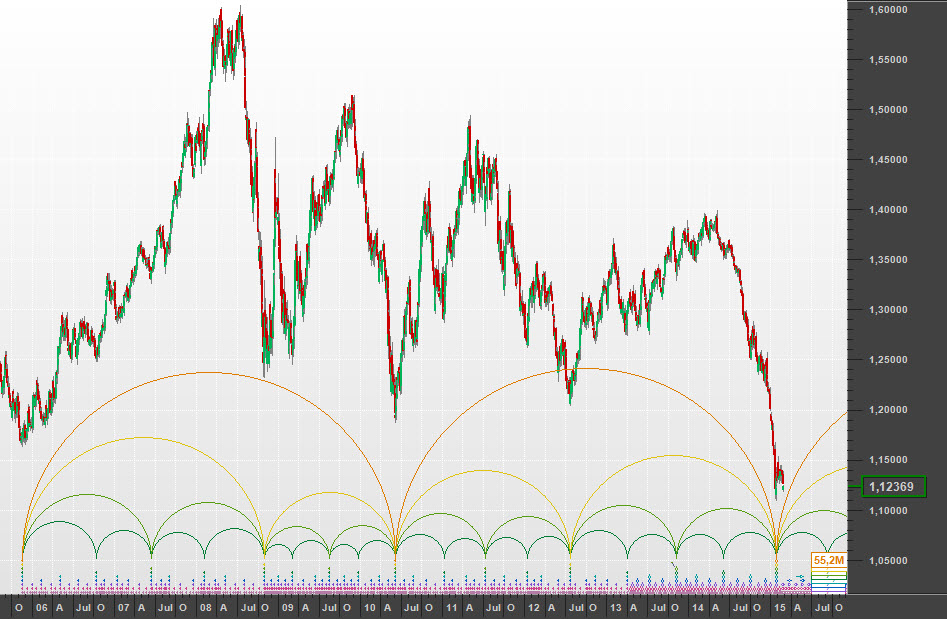 I like to watch the shorter cycles develop as price moves out of a potential long cycle trough. Here is the shape that has formed in the Euro since the trough of 26 January 2015 (the day after the Greek elections it is interesting to note): 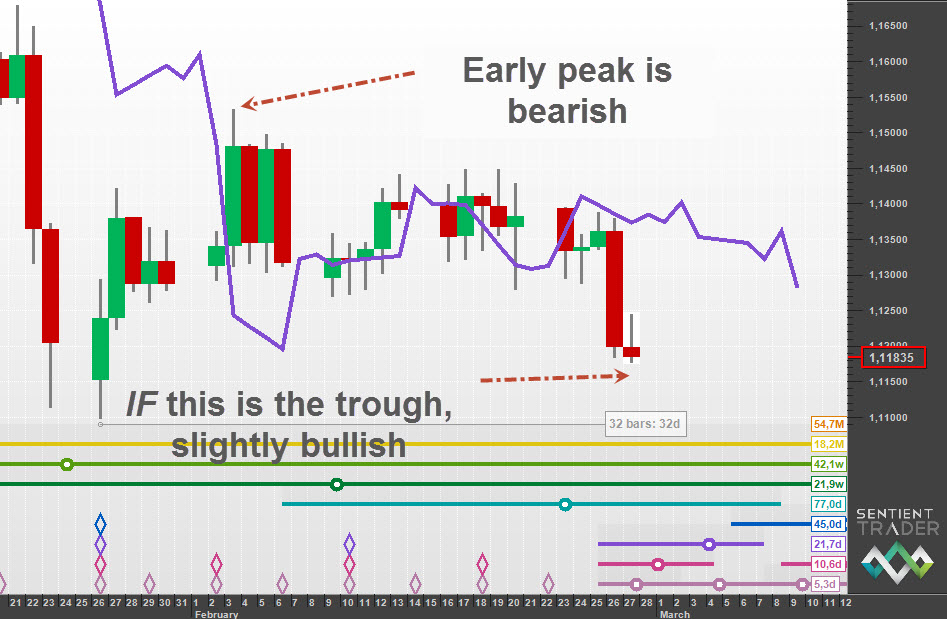 It is certainly not a very bullish 40-day cycle. It is neutral at best, and that is only if the 40-day cycle trough forms soon.

The answer is most probably that this is not the last 40-day cycle into the 54-month cycle, but that we have at least one more 40-day cycle which will be very bearish, probably carrying the Euro down to parity with the US Dollar (or below).

But I like to play Devil’s Advocate, and I should point out that I have seen this behavior before, by which I mean a very sluggish start to a long cycle, with a neutral cycle forming before the big bounce happens. Or of course it can be looked at the other way – the last cycle before the big cycle trough is neutral as opposed to bearish.

A good example of this played out in the NASDAQ from November 2008 to March 2009: 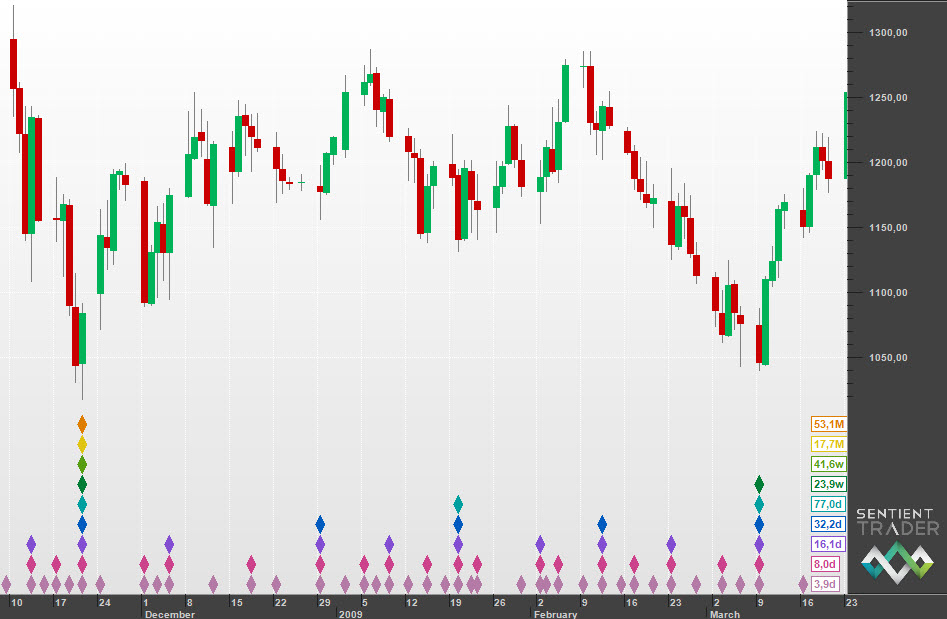 Most stock markets formed their 54-month (or longer) cycle troughs in early March 2009, but the Nasdaq had a slightly lower trough the previous November. In fact the lower prices in November were only lower for less than two days, and so most analysts would probably place the 54-month cycle trough in March 2009.

But my point is that there was a very neutral cycle shape that developed either before or after the 54-month cycle trough. Here it was a 20-week cycle that had a neutral shape. That neutral cycle was either an inauspicious start to a very bullish move, or an early turn which robbed the bear of the last few months of “plunge” into the trough.

And so I cannot help wondering whether we are seeing something similar in the Euro right now, particularly considering that big troughs have formed in the GBPUSD and Crude Oil.

I would love to hear what you think.

10 thoughts on “The Struggling Euro”