I am often asked “In what markets do Hurst Cycles work best?”

I have always answered that Hurst Cycles work equally well in any liquid, well-traded market. But I now qualify that statement, by adding: ” … to the extent that it is not being manipulated”. The word manipulation generally has a negative implication, and so let me clarify that by manipulation I mean “any attempt to influence” … it is not necessarily a negative or evil manipulation!

I think this concept is a very important one to consider now as we are seeing more and more examples of (more and more complex) manipulation in the markets we trade.

When the European Central Bank announced its fairly extraordinary Quantitative Easing program this week, I started wondering what effect this would have on the markets, if any.

If you have been reading my market thoughts for any time you have probably realized that I am a fairly steadfast technical analyst in that I believe in trading the markets on the basis of a cycle analysis, a technical consideration as opposed to a fundamental consideration, such as news events, or bank actions like QE.

But this certainly doesn’t mean that I reject the idea that fundamental actions affect the markets. Of course they do, but the effect is usually either a temporary one, such as a strong move which is quickly retraced, or what I would call a coincidental one, where the fundamental action proves to be the trigger for an expected turn in the markets.

However manipulation over a period of time has a different effect on the markets. It serves to distort them.

And so I do expect the ECB’s QE plan to have an effect on the markets, but I don’t expect it to have the effect of prolonging the bull market indefinitely. In fact I don’t expect it to have much of an effect on the direction of European stock markets generally. (For a good quick explanation of the intended effect of QE take a look at the video here).

It is interesting that Europe is entering a phase of quantitative easing just as the US has ended their QE process. Did it have the desired effect in the US? Opinions are mixed about that, but the point that I would like to make in this post is that while the exact result of Europe’s QE process might be unclear, it will definitely have an effect on the markets. And that effect is one that particularly concerns us Hurstonians. 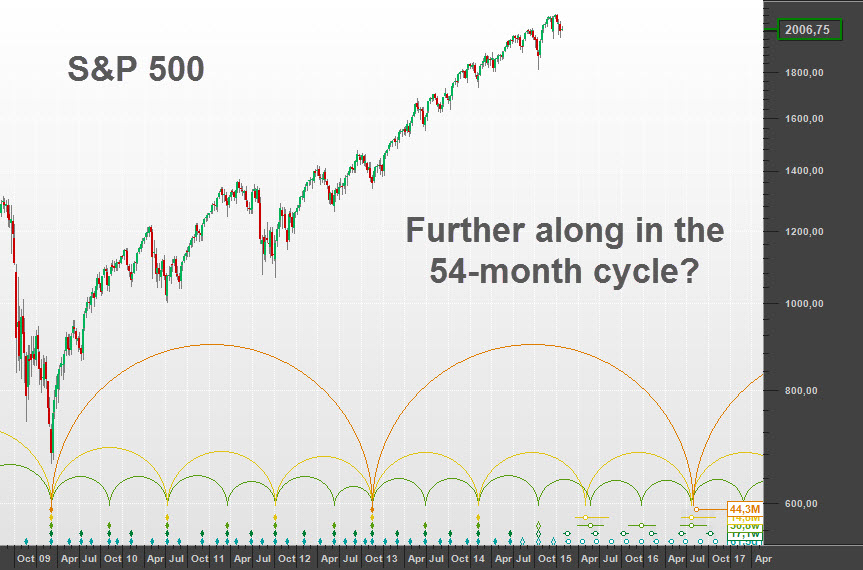 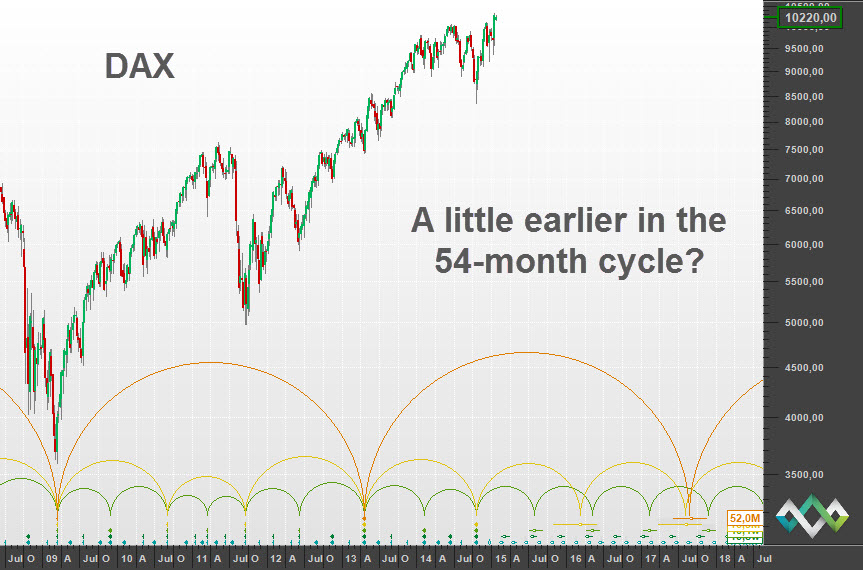 Looking at those charts can we honestly say that we can see the effects of QE in the US? I think that perhaps we can, but not in the way that most people would expect. The big trough in March 2009 was not an effect of QE in my opinion, nor were any of the other peaks or troughs.

The effect that I think we can see is in a distortion of the cycles in the market. This distortion is often difficult to “see”, but it does have a dramatic effect on our analysis and trading of the cycles.

I am suggesting that any manipulation of a financial market (and QE is a manipulation in that it is an “attempt to influence”) does not succeed in changing the fundamental cycle structure of that market, but it does distort the market, making it more difficult to trade from a cycle perspective.

Any manipulation of a financial market does
NOT succeed in changing the fundamental cycle structure of that market,
but it DOES distort the market, making it more difficult to trade from a cycle perspective

In other words if financial markets were completely “free” (a Utopian and impossible idea I know, and before you think that I’m developing radical ideas I hasten to assure you that I am not proposing any sort of “free the markets” campaign!). If they were “free” and not subject to any form of manipulation then I think we would see very clear cycles, and trading those cycles would be a much simpler affair.

I also think that all markets experience varying degrees of manipulation at different times, and a corollary of my suggestion above is that the success of trading any financial market on the basis of a Hurst Cycles analysis is inversely proportional to the amount of manipulation that market is being subjected to.

In June of 2014 I completed some hypothetical testing for a private fund manager. We were applying a Hurst Cycles “angle” onto an intraday forex trading system. I ran tests on many forex pairs and the application of a Hurst Cycles analysis consistently improved the trading performance on all pairs except for those that included the Swiss Franc (USDCHF, GBPCHF, EURCHF, even CHFJPY).

EDIT: I have received a few emails asking for some clarity about these tests, and so here is a little extra detail:

The system was trading the interaction with a 6-hour cycle FLD, and using the direction of the 2-day cycle, and underlying trend up the 80-day cycle. It would take about six trades per day (which is how it made almost 300 trades in 8 weeks).
I didn’t initially go into detail in this post because the system is an extension of Hurst’s work into intraday cycles which opens a completely different discussion (and would require a very long, or several very long posts to explain).
The point I want to make really is that there is something that happens in a “manipulated” market on a level that is not necessarily visible on a daily chart scale. Whereas the tests showed that the intraday cycle approach worked for most forex pairs, the EURCHF tests clearly didn’t.

Let me tell the story with some pictures. The tests were performed on 15-minute bars over a period from 21 April 2014 until 19 June 2014. Here is a chart of the GBPUSD price movement over that time: 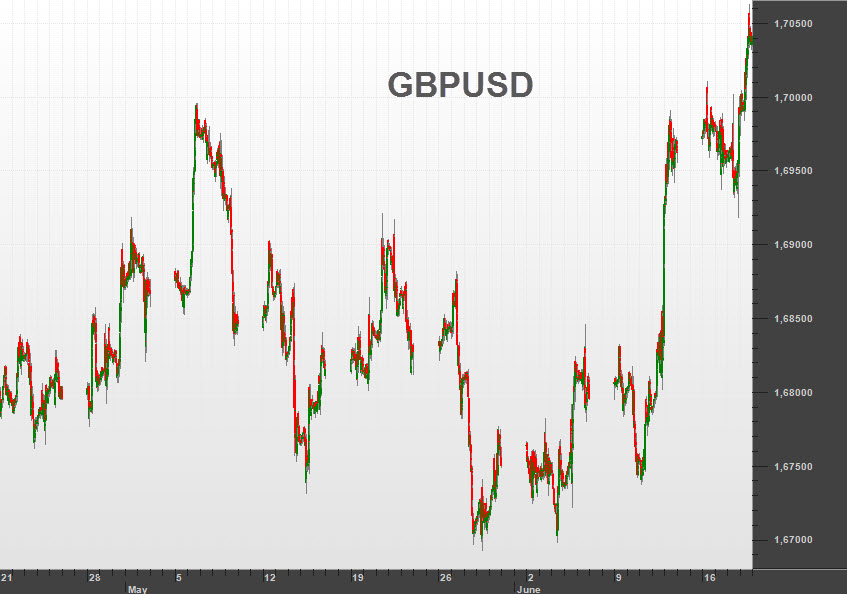 And the results of trading as shown by this equity line: 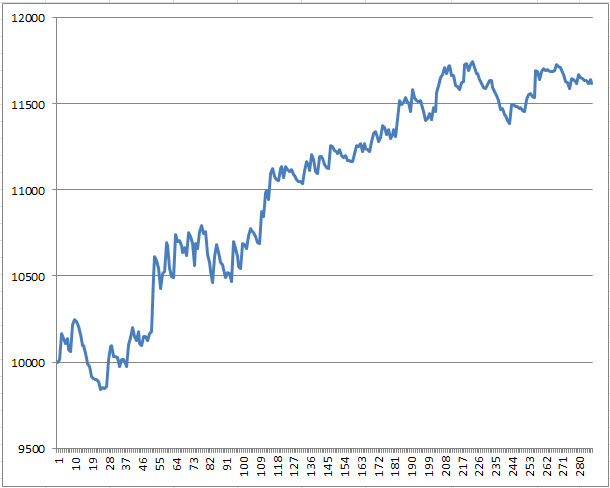 The x-axis is the number of trades, and the y-axis is the equity of the account. You can see a fairly consistent upward bias over the 290 or so trades.

Now here is the price movement of the EURCHF over the same period:

At first glance there is not a great difference between the price movements. In both there is the evidence of cycle action. Perhaps a little more “noise” in the EURCHF. Here is the equity curve in the EURCHF: 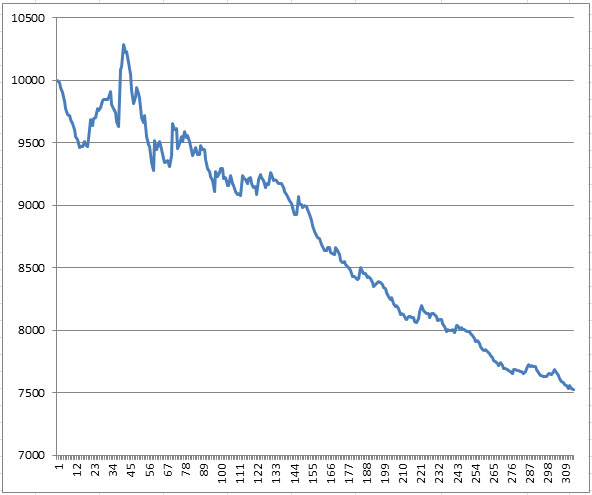 The contrast was stark, and at first I couldn’t understand it. I tried working with synchronized peaks instead of troughs, using the initial cyclic model instead of the default nominal model … nothing worked.

The conclusion I drew at the time was that because the Swiss Franc was pegged to the Euro, trading Hurst Cycles simply didn’t work. Of course there might be another explanation, and I would love to hear what you think.

I hope this example demonstrates the point that I want to make: manipulation of a market makes trading that market more difficult.

And so in conclusion, although I do not expect the ECB’s QE plan to change the overall direction of the European stock markets (which are destined to form a major trough within the next three years), I do expect that the QE plan is going to make trading those markets from a Hurst Cycle perspective more difficult.

6 thoughts on “Markets And Manipulation”