Home » Is This A Mid-Channel Pause?

As any trough is approached in the markets I always like to stand by in anticipation of that trough, in case it happens early. Troughs occur early in bull markets, and we have been in a bull market for some time, so expecting an early trough has been a useful thing to do for the last few years.

When the US markets pushed up strongly this week I asked whether Monday 2 February was an early occurrence of the 20-week cycle trough that I have been expecting to form later in February. 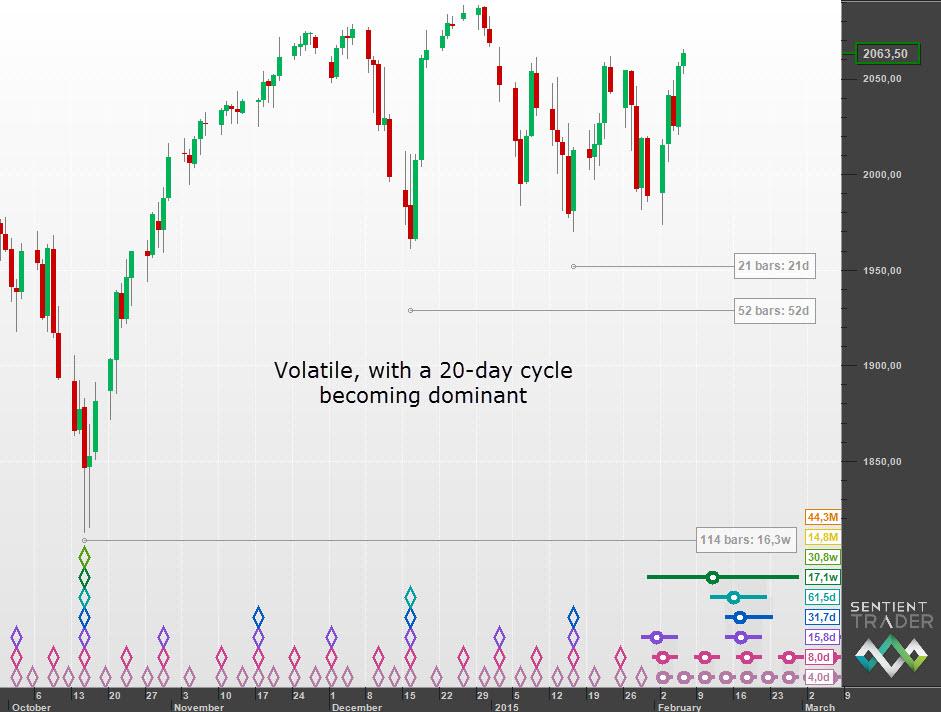 But then why was the move up this week so strong? Often the simplest answer is the correct one, and the simple answer here is that the market is seeing an increased volatility at the 20-day level as that cycle rises to dominance, and so although it seems like too big a move for the rise out of a 20-day cycle trough, it might not be in the context of increased volatility.

This would explain the strong move and implies that the market will still move down (probably with equal strength) into the 20-week cycle trough as we have been expecting. (This is supported in my opinion by the fact that the European markets did not see as strong a move up this week – but with all the inevitable fundamental interaction that has resulted from the Greek elections and their aftermath, that is a fairly spurious point to make).

Hurst defined something called the Mid-Channel Pause, which is the “pause” in price movement on the way up to the peak of the cycle, and a matching pause on the way down to the final trough of the cycle.

The Mid-Channel Pause (MCP) occurs at roughly the time of the trough of the cycle two degrees shorter than the cycle that formed the initial trough – the trough that forms the start of the developing M-shape.

The MCP features strongly in the FLD trading strategy, which offers an easy way of describing the MCP. The MCP occurs at the B-category interaction on the way up, and the G-category interaction on the way down. I usually describe these interactions as being times that price “tracks” along the FLD. It is unusual for price to cross the FLD strongly, and that is because it is in the process of “pausing” on its way up, or down.

The B-category interaction occurs around the time of the 20-day cycle trough, following a trough of 80-day magnitude, which of course matches exactly the definition of the MCP. The 20-day cycle is two degrees shorter than the 80-day cycle (one could say “two cycles down in the nominal model”).

The MCP is very useful because it warns us not expect much of a move down into the trough at the time of the MCP (the 20-day cycle trough in the example of the FLD trading strategy) and it also provides a useful way of projecting an upside target for the full move up to the first peak of the M-shaped cycle. This information is applied in the FLD trading strategy by the general guideline of not going short at the B-category interaction, and in the calculation of the target for the C-category trade (which is known to be a reliable and profitable trade to make).

Why am I going on about the MCP? Because when a trough occurs particularly early, and without much downside movement, producing an unbalanced and not very satisfactory cycle shape, I always ask myself whether an MCP is forming.

And it is definitely possible that we have seen an MCP form here: 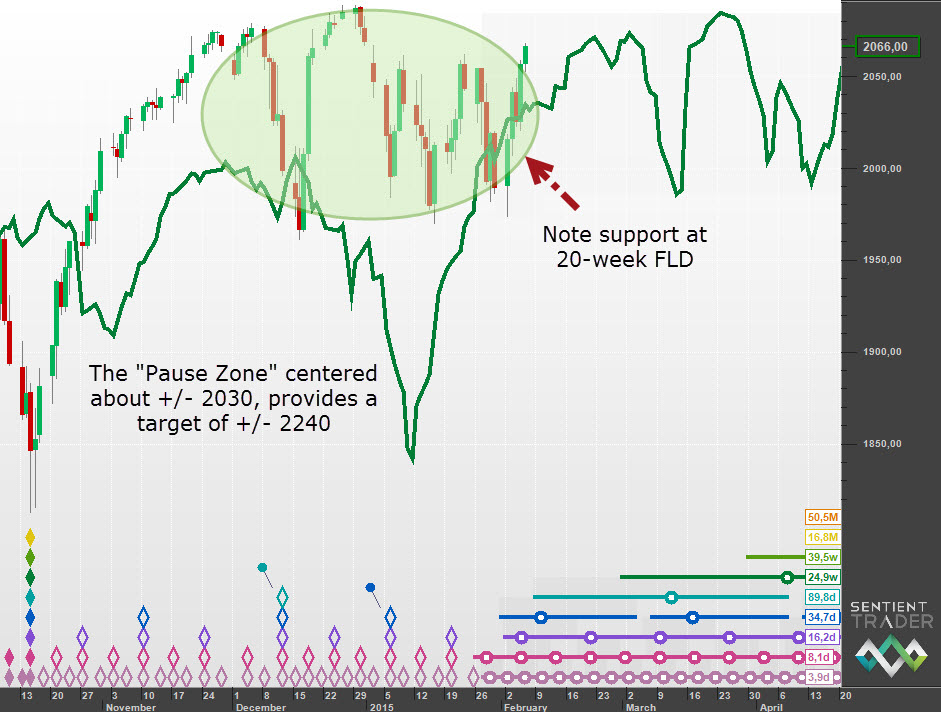 The MCP suggests that the October 2014 trough was of 18-month magnitude (which is possible, although I continue to favor the 40-week option discussed here). The “Pause Zone” is fairly clear, and is centered around the 2030 area in price. Note also how price found approximate support at the level of the 20-week FLD, which is exactly what we would expect of a B-category interaction between price and that FLD.

How do we trade this?

Fortunately we don’t need to spend long suffering from “analysis paralysis”. In the short term:

If the second option is the correct one (that the 20-week cycle trough has occurred and price is breaking out of an MCP) then price will not come down hard at all, but will probably form a typical B-cat interaction with the 20-day FLD. Then we will have a good long entry opportunity.

And so there will be a long opportunity coming along soon. But it is worth bearing in mind the medium to long term outlook:

If the first option turns out to be true, then it is likely that the 9-year peak has formed, and so there is a limited upside. If on the other hand the second option is correct then the 9-year peak probably still lies ahead of us, and there is more time for us to enjoy the profits from long trades.

7 thoughts on “Is This A Mid-Channel Pause?”