It has now been about 45 years since J M Hurst first discovered a nominal model in cycles. That time period alone should make us wonder if it is still the same today. Perhaps if you’re talking about the monument at Mount Rushmore, you should expect little change at all. But the markets are in a state of continual flux, and so it is very likely that something is different.

This is particularly true concerning the most recent few decades. Here’s a chart which shows the market from 1950 till now. Since the prices of the S&P 500 are quite different between 1950 and now, I have made this a log chart: 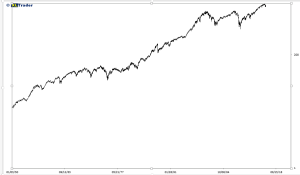 So let’s look at the first Nominal Model as it appeared in Hurst’s book, “The Profit Magic of Stock Transaction Timing”. Hurst derived his timing from a Fourier analysis and a digital discovery algorithm. He declared that these two methods perfectly agreed with each other. 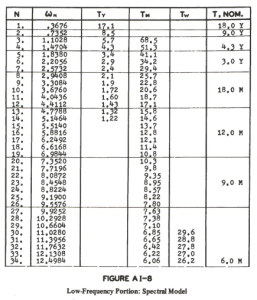 This chart shows the original readings he got, and the rightmost column shows his choices in creating a nominal model. I would note in passing that there are 5.7 and 4.3 years cycles shown. He chooses to represent both of these as basically 4.3. He could just as well have represented them in a nominal model a 5.7 year and 4.3 year cycle. Further, he noted that the six months and three months cycles seemed frequently combined to create an 18 week cycle.

When Hurst published his Course, he presented a new nominal model: 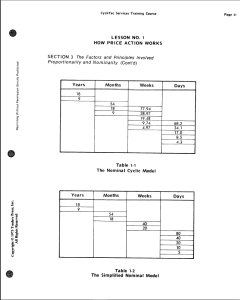 Hurst now emphasizes the Principle of Harmonicity which means that the cycles are multiples of each other, usually two and sometimes three. So the 3 year cycle and 12 month cycle are gone. But I have always felt there is really more than one model. A second one might be overlaid on the first, for example, 9 months, 1.5 years, 3 years, 6 years, 18 years. Maybe 12 months, 2 years, 4 years, 8 years? Indeed, we often see the “expression” of a nominal model in real data turns up unexpected cycles. Finally, there is the Sentient Trader Nominal Model:

This is just the same as the Course, not surprisingly.

So how can we recheck Hurt’s work? First, we get the same data he used, the DJIA from 1921 to 1965, or almost. In fact, my data was daily whereas Hurst used weekly. I think the Dow Jones Company, now owned by Standard and Poors, is putting on restrictions because now it seems impossible to find an online chart that goes further back than 1985. So I used daily. That shouldn’t make any difference. I take a year to be 260 trading days.

Hurst used Fourier analysis because that’s what he had. But Fourier has lots of problems, requiring large amounts of data and being unable to distinguish between two close cycles. Better methods have been developed, including Maximum Entropy Spectral Analysis, or MESA. MESA needs less data and can sharply distinguish between close cycles. Furthermore, it can detect a cycle given only one or two instances of it. So I chose to use a MESA program. But can it reproduce the cycles found in “Profit Magic”? 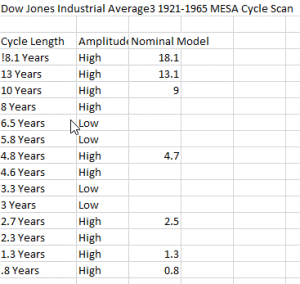 So we can trust MESA as a method and confirm Hurst’s original findings. Hurst found a Principle of Proportionality in his work with Fourier, in that the longer the cycle, the more amplitude. However, cycle amplitude in MESA does not always follow that. I have chosen a nominal model by using only high amplitude cycles. 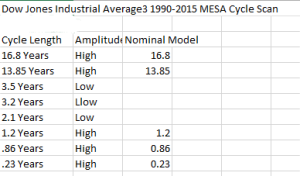 So what are we to make of this? This result stems principally from my decision to start my data series in 1990. I believe that beginning approximately at that time, markets began to behave in a way markedly different than before this time. Accordingly, I believe stock market analysis should not use data approximately before 1990. Other people have noticed this also. I recall one estimate placed the change as 1987, the year of the peculiar short crash.

If you don’t agree with me on this point, and you use data previous to 1990, then you obviously get a different result. For example, many analysts use “postwar” data, everything after about 1945. I suspect that if they were looking for a nominal model, it will resemble Hurst’s a little more and mind a little less.

But what is the difference to actual trading? The answer is, very little. Most traders only consider cycles of 18 months or less. These are somewhat changed today from Hurst’s nominal model, but they are still there and active. The fact that there is a vast vacuum beyond 18 months should not affect anyone’s actions. What might make a difference is the increased trend. If anything, the possibility of making large amounts of money has increased. The country has already noticed that the rich are getting richer, mostly in the stock market.

The message is this: we cannot take any nominal model for granted, and that probably we should search for an updated nominal model every year or two.

16 thoughts on “Revisiting the Nominal Model.”