One of the results of the way in which cycles combine to influence financial markets is something Hurst called the “Mid-Channel Pause”.

The mid-channel pause is, as the name implies, a pause in price movement which occurs “mid-channel”. But you don’t need to construct any channels in order to identify the mid-channel pause. It is simple to identify, and is a wonderfully powerful cyclic structure which gives you a real edge in terms of knowing what to expect next. Mid-channel pauses offer that rare trading opportunity: a high-confidence, highly profitable trade.

This week the EURUSD forex pair provided us with a text-book perfect example of a mid-channel pause, and so I am taking the opportunity to record this example, in the hope that it will provide a good reference to help you identify mid-channel pauses in the future.

First of all, what is the mid-channel pause? 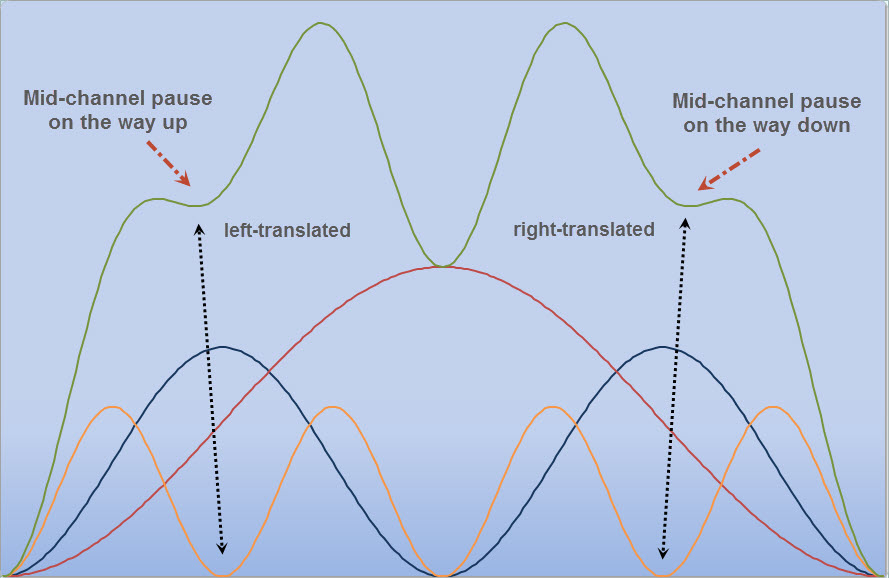 Price is represented in the graphic by means of the green line, and it is calculated as a composite of the three cycles shown at the foot of the graphic (the red, blue and orange lines). This combination of cycles is probably familiar to you – it is the way we Hurstonians usually explain how multiple cycles combine in a price movement.

Why does the mid-channel pause form?

The mid-channel pause forms because of the way in which cycles combine to influence price movement (according to Hurst’s Principles). In particular the way in which three cycles combine (three adjacent cycles in the nominal model). In the graphic above it can be seen that as the shortest (orange) cycle is forming a trough the next longer (blue) cycle is forming a peak. It is this combination of contradictory impulses that results in the mid-channel pause.

When does the mid-channel pause form?

The mid-channel pause forms on the way up at the first trough of the cycle which is two degrees shorter than the cycle which formed the “initial” trough. That is a bit of a mouthful, so let me try to clarify … in the graphic above the left edge of the graphic is where the red cycle is forming a trough. I call this the “initial” trough because it is where the pattern starts. The cycle two degrees shorter than the red cycle is the orange cycle … and so the mid-channel pause forms at the first orange cycle trough.

On the way down the mid-channel pause forms at the last trough of the cycle two degrees shorter (before the final trough of the longer cycle).

There is an important subtlety that I have highlighted in the above graphic. Notice how the mid-channel pause on the way up is left-translated. In other words the actual trough in price (the green line) occurs to the left (or before, considering that the x-axis is the time axis) the actual trough in the orange cycle. And the mid-channel pause on the way down is right-translated. This is really important, and is not some kind of “the markets are not perfect” expectation – it is the simple result of the mathematics of combining the cycles.

What can we expect from a mid-channel pause?

The mid-channel pause in the markets

Enough looking at idealized graphics! What does the mid-channel pause look like in the markets? Here is the text-book example that played out in the EURUSD this week: 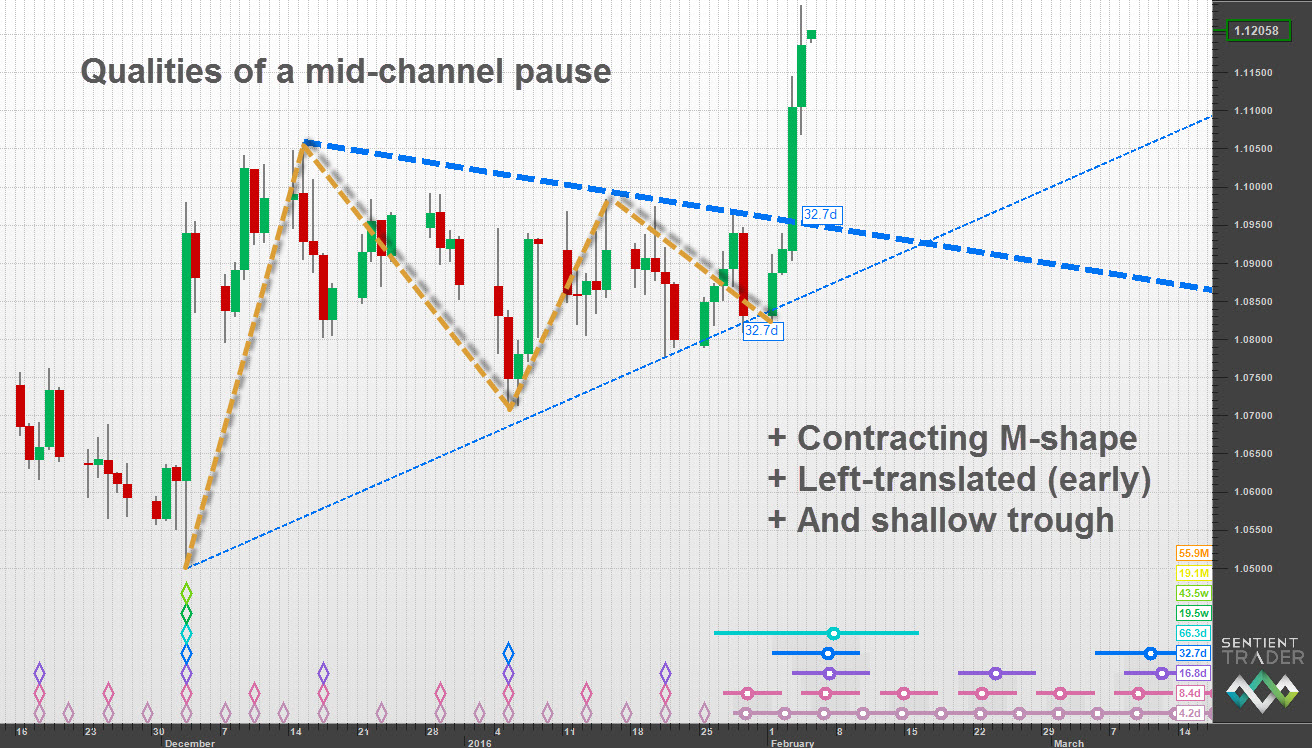 Notice all the qualities of the mid-channel pause are present:

When the downward 40-day VTL is crossed by price, we have confirmation that the 80-day cycle trough has formed. Here is that 40-day VTL: 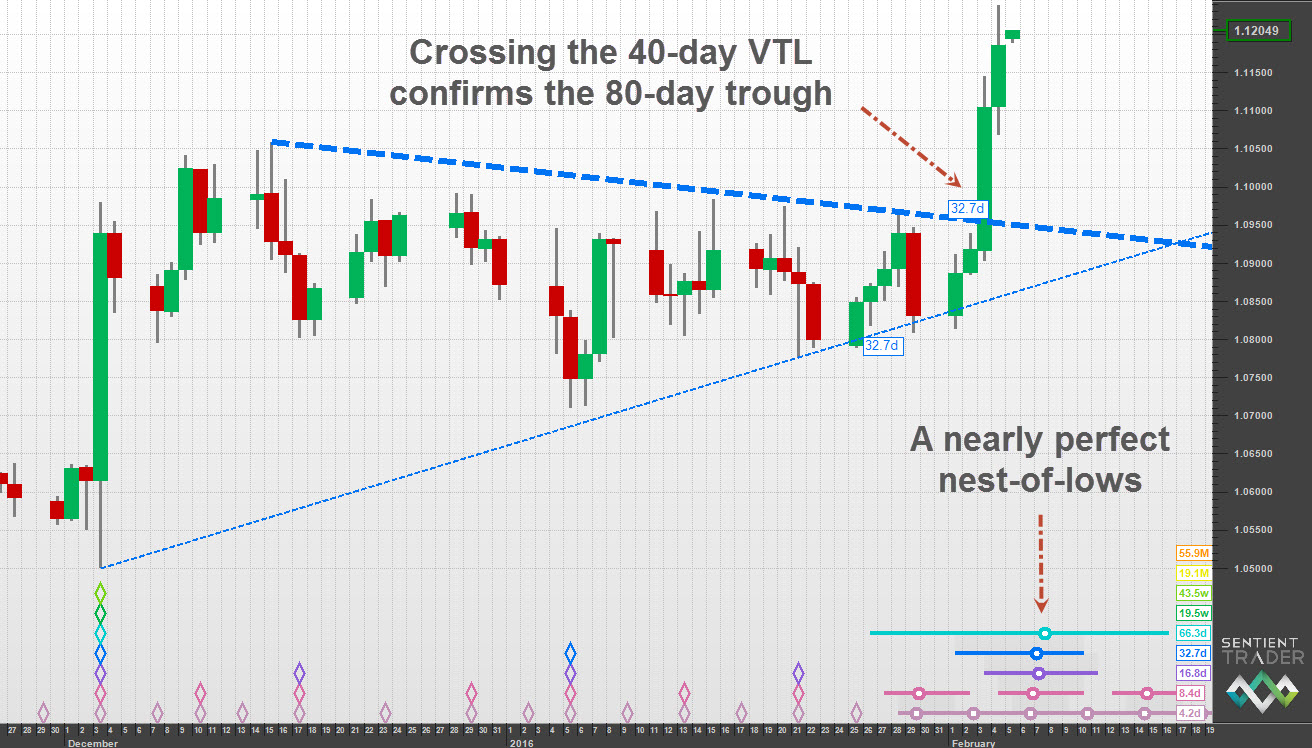 And so we have confirmation that the 80-day cycle trough has formed, despite the fact that it is only expected in the next few days. Some VTL confirmations should be taken with a “grain of salt”, but this confirmation looks pretty good to me.

The VTL of the cycle which provides the confirmation of the trough often provides a very good entry point for a trade out of the mid-channel pause.

The mid-channel pause and the FLD

The signal cycle on the FLD trading strategy is the shortest of the three cycles … our orange cycle in the graphic above, and the 80-day cycle in this EURUSD example. The mid-channel pause occurs at the first trough of the “signal” cycle, which is where we expect the B to C-category interactions. And we expect price to track along the FLD as the mid-channel pause is forming.

Here is the 80-day FLD in the EURUSD: 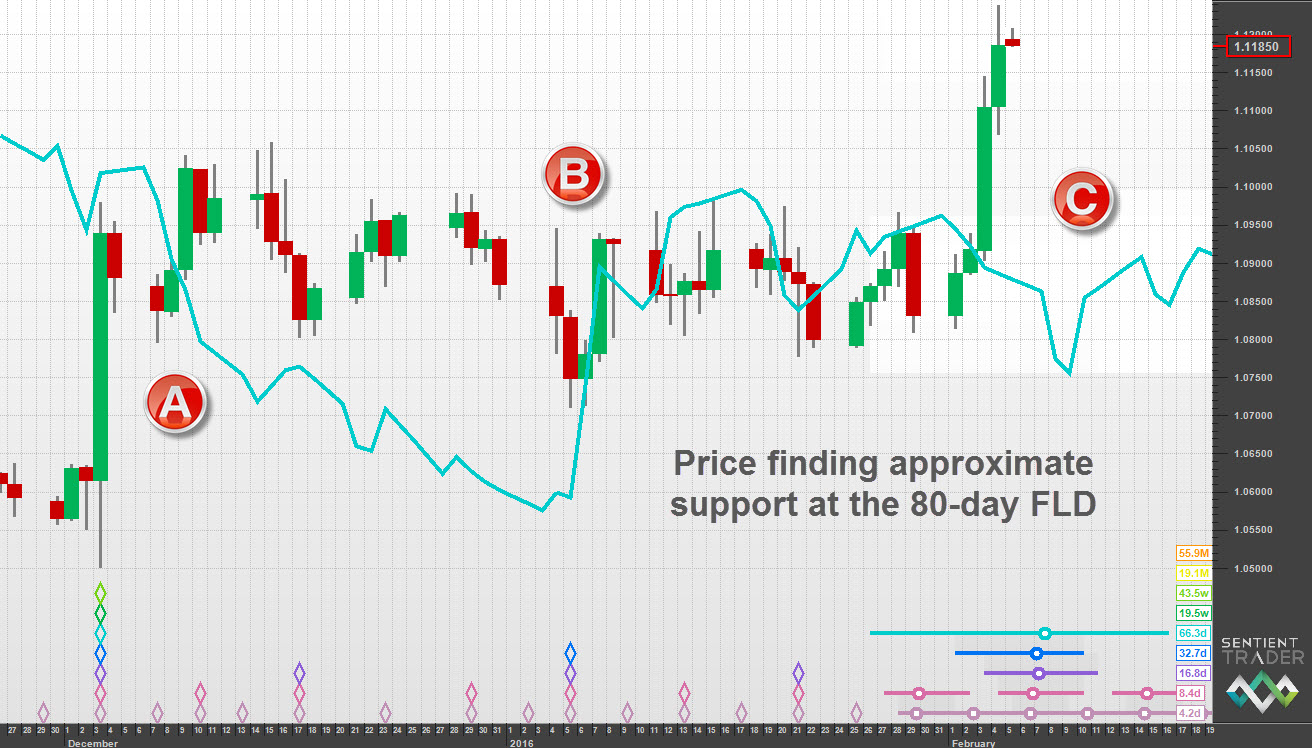 Notice how price found support at the 80-day FLD, and then tracked roughly along the FLD before pulling up in the C-category breakout interaction.

Go forth and trade! 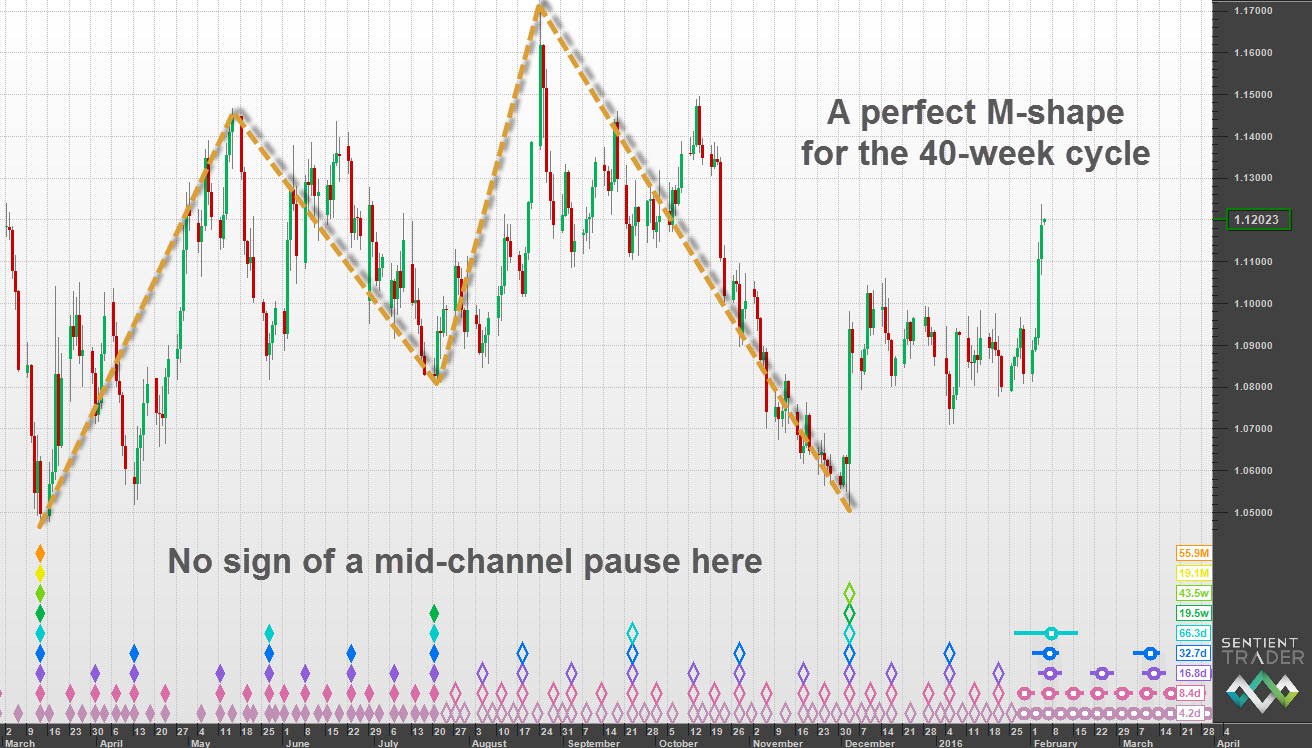 But when they do form they offer wonderful trading opportunities.

7 thoughts on “The Perfect Mid-Channel Pause”